In addition to my daily Bible reading, reflection and time of prayer, I now have two years worth of poetry to read (specially selected for each day of the year) thanks to two very thoughtful Christmas presents. You can read about them here or click the picture. This poem by Susan Coolidge has been used in a UK hospice to bring comfort to patients, and is clearly suitable for the first day of a New Year, and the title also calls to mind Bible verses from Lamentations 3:22-23 – Because of the Lord’s great love we are not consumed, for his compassions never fail. They are new every morning; great is your faithfulness.

It’s said that New Year resolutions are a to-do list for the first week of January; we might smile, but many a true word is spoken in jest.

I asked some friends on Facebook for their thoughts on New Year resolutions, and I received some interesting responses:

I don’t bother making them.

I made one many years ago, it was never to make any more. I’ve stuck to it.

I make the same one every year and break it at that exact moment. I resolve to not make any New Year Resolutions.

Are they not just a bit of a joke? I’ve never taken them seriously. I find making small goals throughout the year is a lot easier.

I see them as a declaration of good intent, sometimes purposeful but often lacking in any real commitment.

If you want to achieve something, and you are serious about it, simply set the goal whether it is New Year or not.

One of my friends followed up their initial comment with these helpful words:
I do see January as a time to start afresh and perhaps pick up things that have been dropped throughout the year. So, for example, I’m planning on starting running again having let it slip through autumn and winter. But I don’t like the pressure of New Year resolutions and the feeling of failure for having set unrealistic goals because of the apparent expectation of society to do so.

If we are going to make resolutions, we need to be realistic and set achievable goals, describing them in specific terms. Maybe large goals are best split into smaller ones, with a planned starting date and time period. It might be helpful just to focus on one or two things, rather than a whole list. Ultimately it’s about aiming for things that are important to you, not what you think you ought to do or what others expect of you. See also here.

As for my resolutions, get back into the habit of running and aim for better sleep.

Thank you Hannah, Tris, Leanne, Mark, Paul, Stephen and Emlyn for your thoughts. 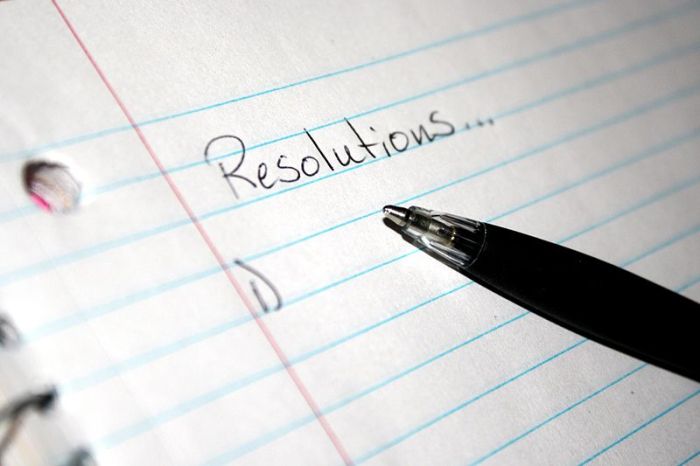 Do you remember your New Year Resolutions? Yes, I know they soon get forgotten, but the start of September is a good time to review them (or any month actually).

For me, family life is very precious, as I’ve written about here. My New Year resolutions for 2018 reflected this, and I’ve tried to do justice to them: Look after myself better and sleep well (so I can be there my family and work smarter). Spend quality time with family every day. Live in the moment and worry less. Effective planning and organising in my personal and work life. Run twice a week.

I’ve not totally succeeded, but I remind myself that every day is an opportunity for a fresh start – not just at the start of the year.